To help you better understand the range of craft beers out there, we have put together a brief guide to the main beer styles available!

The variety of beers out there are seemingly endless and can be a bit overwhelming when deciding what to make or drink. Whether you’re looking for a new brew to ferment or standing in line at a craft beer bar, the ‘uuuhhhh’ going through your head as you make a choice can go on for a while!

To help you avoid this situation, our Mangrove Jack's brewers have put together some info so that you know what you’re getting rather than being surprised with the first sip.

Most beers can be categorised as lagers or ales – this is determined by the yeast used during the fermentation of the beer.

Your lager or ale then has sub-categories to further differentiate between various colours, flavours and aromas in each brew. Once you know what style you prefer, it becomes easier to choose what you’re going to brew next. A floral, hoppy pilsner with bitter base notes perhaps? Or does a thick, chocolate stout appeal more for the winter months?

This is by no means an exhaustive list, but it will give you a brief overview of some of the more common types of beer.

Stronger and smoother than other lagers, this intensely flavoured brew comes from the town of Einbeck. This beer style is often associated with special occasions or holidays.


Click here to see all Lager recipes in the Mangrove Jack's Blog!

Originally a descriptor for porters and stouts, brown ales date back to the early 1700s in England. Malty, sessionable and delicious.

A more recent addition to the beer variety market - only 300 years old or so. A low level bitterness with hop flavours popping through.

With a strong bitter note and upfront hoppy flavours, The IPA was first born in England and quickly became popular with the East India Company who exported it. It was later revived during the craft beer revolution in the USA.


Click here to see all Ale recipes in the Mangrove Jack's Blog!

Often used interchangeably with the term stout, porter beers have a distinct roasted flavour and are usually higher in alcohol content.


Click here to see all Porter recipes in the Mangrove Jack's Blog!

Historically every strong beer was called a ‘stout’, however it is actually just the more full-bodied version of a porter. Lots of full flavours in the chocolate and coffee realm.

These beers are well-recognised by their unique yeast fermentation flavours. The historical evolution of these styles is heavily tied to the beers produced by Belgian monasteries for the monks.

Wheat beers range in colour and maltiness, but are renowned for their banana, apricot, bubble gum and clove flavours and aromas.

All sour ales are considered wild, but not all wild ales are sour. With the addition of bacteria and specific yeasts, wild beer styles are fast becoming popular with beer lovers worldwide.


Click here to see all Sour Ale recipes in the Mangrove Jack's Blog!

This umbrella term covers any type or style of brew that has a specific ingredient added to it. With so much experimentation going on and unique craft brews popping up everywhere, most of these don’t fall into a traditional category and are considered specialty.

Below: A handy guide to the distinguishing characteristics of popular beer styles! 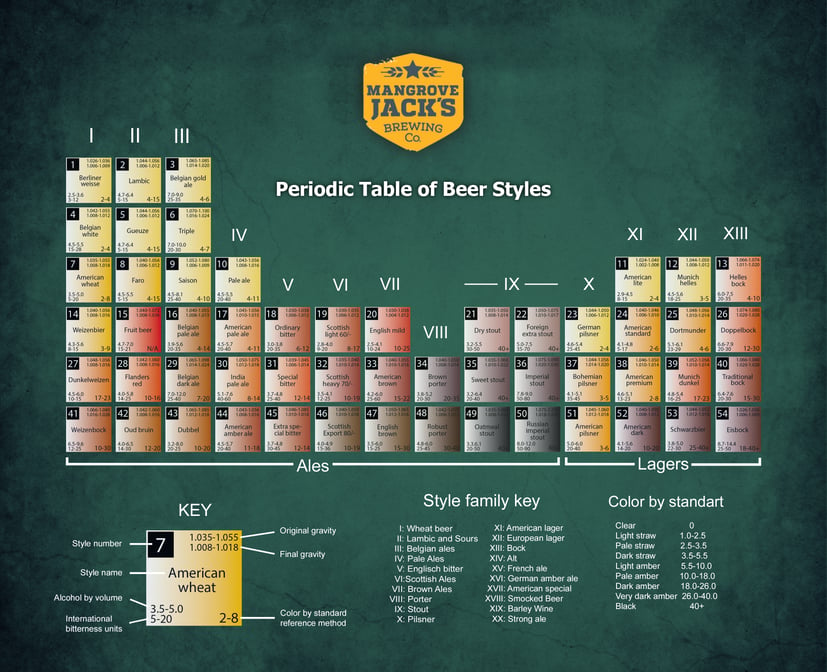 Browse our blog topics by the tags below!

See all
Back to Blog

Send us a message

Answered by our New Zealand and UK office: